Opportunistic honey hunting is as old as humankind. The earliest representations of bees and their nests are known from rock art dating back to the Palaeolithic era around 15,000CE. Honey is valuable and the process of harvesting it fraught with danger. This has led to diverse myths and legends, folklore and stories surrounding honey hunting.

The dense forests and steep escarpments of the Nilgiri Biosphere Reserve (NBR) with their abundance of flora and fauna provide the ideal environment for the giant honey bee (Apis dorsata). The people living here have a tradition of honey hunting and are renowned for their bravery and skill using basic equipment to scale high trees and cliffs. The varying methods used by local groups have given rise to specific honey gathering territories. Collecting this honey is a spiritual affair requiring mental and physical preparation and purification. 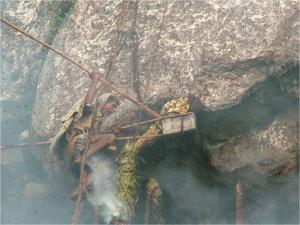 The Himalayan honey bee (Apis laboriosa) similarly plays an important part in many mountain livelihoods and cultures as well as having a critical role in pollination. However, neither their biology nor their role in mountain biodiversity are well understood. In the high mountain areas of Nepal, the continued existence of these honey bees are threatened by changes in habitat and by human interference, with the consequent loss of indigenous culture and knowledge in honey hunting communities.

In the tropical forests of the Philippines and Malaysia honey gathering, mainly from Apis dorsata, still takes place and local honey can be found for sale along the roadside although the forests are increasingly threatened by human encroachment and destructive activities including charcoal burning and illegal logging. Nonetheless, the honey hunter remains an esteemed character embodying bravery, skill and knowledge. In Vietnam and Cambodia Apis dorsata is kept using a special style of using rafters which forms one of a number of intermediate methods of honey bee management between honey hunting and beekeeping.

In Africa, the North Western Province of Zambia emerged as the "Honey Province" because of its historical tradition of trading beeswax, its remoteness, and its vast miombo woodlands. For many generations the collection of honey from wild bees' nests and later from bark hive beekeeping have been part of village life and has later been transformed into one of the most successful honey production enterprises in Africa.

The Ogiek tribe in the Rift Valley of Kenya is one of the few remaining hunter-gatherer peoples in East Africa. Honey plays a central part in Ogiek society being used for food, beer brewing and trade. As well as honey hunting, people also use beehives of hollow logs placed in tree branches. The Ogiek have been struggling for many years to resist eviction from their ancestral home in the Mau mountain forest and to protect it from settlers, loggers and tea plantations.

Exporting to the EU