Beeswax is one of nature's amazing materials. Pure beeswax from Apis mellifera contains at least 300 different compounds being a complex mixture of hydrocarbons, a variety of esters and free acids. Human societies have long valued beeswax. Despite the use of cheaper petroleum based waxes, beeswax remains the most versatile bee product. It is used for a range of industrial processes, for instance as an ingredient in many cosmetics, ointments and pharmaceutical preparations. It is important in batik and other textile work and central in certain metal casting and modelling processes, as well as wax foundation for beehives and in candle making.  No candle is more beautiful nor has a more delicious aroma than a lustrous candle made from pure, golden beeswax. 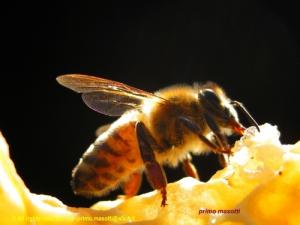 Bees are stimulated to produce wax when there is a surplus of honey and a lack of honey comb in which to store it. It is made by young worker honey bees that secrete it as a liquid from four pairs of wax glands on the underside of their body. The liquid wax spreads over the surface of 4 pairs of special plates (called 'wax mirrors') and hardens on contact with air to form a tiny, white, wax scale. A worker honey bee produces eight of these flakes of wax every twelve hours. The bees chew the tiny scales using their mandibles (jaws) and salivary secretions become mixed with the wax. When it is the right consistency, the new wax is used for constructing comb and sealing cells. It is very clear to a beekeeper when bees are making wax as they hang in distinctive chains which help to maintain the optimum temperature needed for wax production.  It takes about 1250 scales of wax to produce 1g of beeswax.

Beeswax can provide a beekeeper with worthwhile extra income yet it is often neglected as an income generating resource. Unlike honey, it does not require careful packaging and storage so is simpler to deal with, and the creation of value added, secondary products from beeswax offers a unique opportunity for income generation for women because it utilises their traditional skills. Some African countries, for example Ethiopia and Angola, have significant beeswax exports, while in other countries beekeepers remain unaware of the value of beeswax and even throw it away. This is a wasted resource, for bees consume around eight kilograms of honey to produce just one kilogram of beeswax.

There are a number of methods to separate beeswax from honey. Some are more complicated than others so the choice of method will be determined by its suitability for individual circumstances. The three main ideas are:

Each of these methods can be carried out using simple constructions or utensils that would normally be found in an African household. In each case the wax produced will need a second filtering for it to become clean enough for use.