Beekeepers may observe that their bees suffer from disease at one time or another. Some diseases are relatively minor and the bees recover quickly while others can have a much more dramatic and harmful effect on the bees. The writing of the ancient Greeks show that the diseases we call foul brood, dysentery and paralysis existed in Apis mellifera over 2000 years ago, showing that disease problems are not new.

Honey bees are social insects, living and working together in constant contact. The environment in a honey bee colony is an ideal climate for fungi and bacteria to thrive in. It is warm and humid with thousands of individuals rubbing closely together, touching each other frequently, sharing pheromones and food. It is a tribute to the natural resistance mechanisms of the honey bee that they are so little troubled by disease.  One factor in this is the action of the filtering device in the bees' gut known as the proventriculus. This can separate unwanted particles, even those as small as bacteria, from the nectar suspension in the crop. The immune system of the bee is only just beginning to be examined while genetic fitness is also important in disease resistance. This develops when bees are challenged by disease or parasites and over many generations the colonies that are most resistant to local diseases will survive. Unlike many animals, a colony of social insects will utilise certain aspects of their social behaviour as part of their disease defence strategy. For instance, recognising and removing sick brood and adult bees is an important part of the honey bees' defence mechanism. As am example, if a colony of African bees is severely infested by the Small Hive Beetle Aethina tumida, colony change happens in a co-ordinated way with all the bees absconding as a single unit. An example of a more disorganised colony collapse can be seen in the western honey bee Apis mellifera, with a serious Varroa destructor infestation. In a colony seriously infested with varroa all thebees leave the hive moving into other colonies nearby.

Bees can be attacked by bacteria, viruses, fungi, protozoa, and a range of parasites and diseases of uncertain origin. Diseases can affect both larval and adult stages of the honey bee lifecycle. Where they attack the adult they are commonly termed 'adult diseases', while those attacking the larvae are known as 'brood diseases'. It is unusual for a disease to attack both life stages but varroa mites, and the viruses they carry, affect both adult bees and the larval stages. Some diseases and parasites can be very infectious, spreading easily between colonies and causing harm to bee populations over a wide area. Minor brood diseases and disorders may not be very serious but can be widespread while some problems can be caused or exacerbated by the actions (or inaction) of the beekeeper.

Not everything that causes problems to the honey bee is caused by disease. Hives can be damaged, disabled or lost from a range of other causes that are of physical or husbandry origins rather than a disease vector. Hives can perish from starvation, from losing the queen or having a failing queen. Laying workers will cause the ultimate demise of a colony.

Controlling disease starts with good husbandry. Cleanliness, sufficient food and recognising when something is wrong will go a long way towards protecting colonies against diseases and disorders. 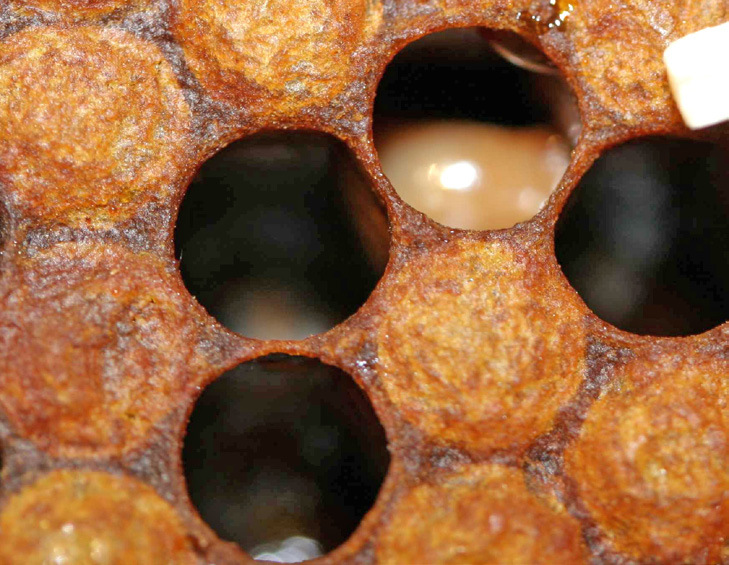