All species of honey bees are social insects (scientifically termed eusocial).  Colony members live in a single nest and work together creating, what is sometimes called, a 'superorganism'.  This arrangement works to enhance the survival of the whole colony. However, it also imposes a set of demands and limitations on their biology and behaviour. For the 'superorganism' to function and thrive the colony is governed by a rigid social structure and division of labour with a colony divided into female castes.  The workers are sterile, with no capacity to reproduce. Their role is to carry out the many functions imposed by social living; including collecting, processing and storing food in large quantities - this food store helps the colony survive in times of shortage.

Honey bees have reached the highest level of social organisation. Consequently, although individual bees die, the colony is essentially immortal because it persists from generation to generation - with parent colonies dividing at times to form new daughter colonies. Honey bee bodies have a typical insect form - divided into head, thorax and abdomen.They have 6 legs, 4 wings, compound eyes and sophisticated sensory and communication systems, essential in highly socially adapted creatures. 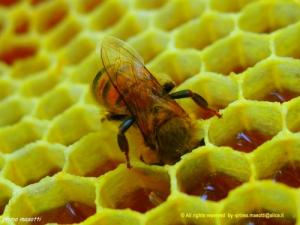 Each colony has a single queen that is the mother of the colony. There are between 10,000 and 50,000 worker bees that carry out all the tasks of the colony. Their numbers fluctuate following an annual cycle dictated by the seasons and climate around them. Drones are male bees whose sole function is to fertilise the queen.  Around 500 drones may be raised by the colony when they are needed, but as 'passengers' they are expelled from the hive and die during periods of dearth, so they will only be seen during periods of plenty.  As such, they are a measure of the strength of a colony.  All the types of bee in the colony are essential to each and together they make up a single unit - each component of that unit being incapable of functioning alone.

Honey bees undergo a four stage process of metamorphosis - egg, larva, pupa and adult. The young stages are known as brood and the development of the brood takes place in the honeycomb. Honeycomb is made of wax secreted from small glands on the underside of the worker bee and then formed into the familiar hexagonal cells that fit snugly together in a very efficient, space saving design.  Honeycombs hang vertically and side by side. The space between the combs is fixed by the bees. It allows two bees to pass each other precisely, back to back, when they are walking up the face of the honeycomb. This space is known as the bee space and is the cornerstone of our understanding of moveable comb beekeeping.

Honey is always placed at the top of the comb, with a ring of pollen below it, close to the brood so it can easily be made into food for the young bees. The brood is always in the centre forming a ball effect with the honeycombs cutting through it. This is where it is well protected and warm, insulated by the honey stores and covered by adult worker bees who are able to maintain the brood nest at the perfect temperature for brood development (35 degrees C).  The queen lays one egg in each cell, and after hatching the larvae are fed by the worker bees. When the young larvae are ready to pupate they are sealed inside the cell with a wax capping until they hatch into adults. When they emerge they are ready to join in all the activities required for the smooth running of the colony.

Exporting to the EU